Many modern technologies we take for granted started as basic mechanical objects. Take the television, for example. We can't think of going through our life without televisions. They are now as common as dishwashers in your home. We have Netflix, Amazon, and a host of content providers competing to win our subscriptions.

However, the beginning of television was in basements and labs under the efforts of some scientists and engineers. Over the years, television technology evolved to reach the present 4K age. Let's travel back in time and find out how televisions became our everyday companions.

A. The Early Televisions of the 1800s

The technological developments of the 1800s facilitated the experiments around early televisions. Mechanical TVs soon started appearing on the scene and used a mechanical scanning system to produce images.

These mechanical televisions used a perforated rotating disc to capture or scan images at the transmitter end. The receiver also had a rotating disc that converted the electrical impulses to images.

In 1862, the Pantelegraph, created by Abbe Giovanna Caselli, aired the first image through wires in history. The device could successfully transmit drawings and handwritten text. However, people consider it a predecessor of the fax machine rather than television. 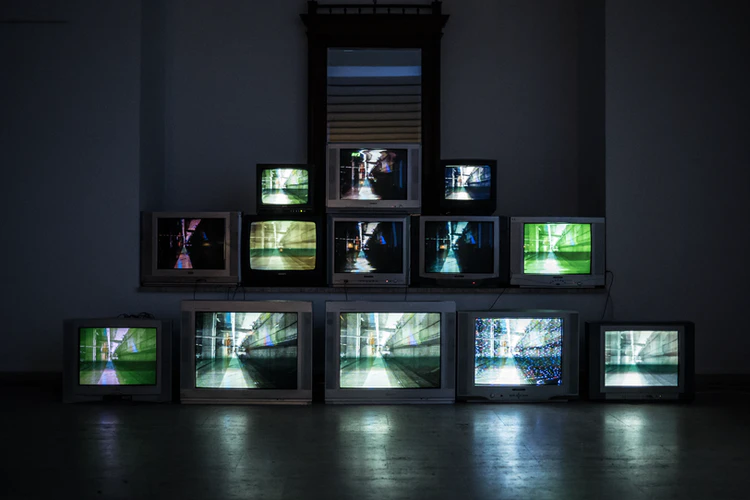 The radio receiver at the other end picked up these impulses and sent them to a neon light. The light would vary according to the impulses and use another perforated rotating disc to produce images.

The next big invention was the cathode ray tube (CRT) in 1897. A German physicist called Karl Ferdinand Braun was able to fuse the ideas of the camera and electric impulses. His cathode-ray oscilloscope had a fluorescent screen that produced images (visible light) when a beam of electrons is projected to it.

Finally, in 1907, we had the first-ever closest resemblance to our modern televisions. A Russian scientist named Boris Rosing created the first TV by combining a mechanical scanner and CRT.

Rosing's invention used the rotating disc scanner as the camera. However, the receiver end had a CRT that produced images when hit by focused electron beams. He was able to air very basic and low-resolution images of geometrical patterns.

The concept was ultimately championed by John Logie Baird, a British inventor. By 1932, he had created a workable TV technology using CRT and mechanical scanners. He was even able to broadcast television signals between New York and London and sold 10,000 TVs.

BBC even went for Baird's mechanical TVs around the same time.

B. The Invention of Electronic Television in the 1900s

The mechanical televisions from a few inventors were sold to consumers. But only the rich could afford the complex devices that were mostly unreliable. The TV sets broke down quite often, and the transmission range was another big limitation.

The quality of the images was another problem. You could never get a good image as the systems could transmit only a few lines of resolution. Moreover, the speed of the disk created a restriction on the number of frames you could transmit.

After selling a limited number of units, the mechanical TVs never made it to the home of common people.

All this while, a few people were working on developing electronic TVs based on the CRT. 21-year-old Taylor Farnsworth is one such name the TV industry will always remember.

Farnsworth worked out in his teens that a beam of electrons can scan any image using horizontal lines. Additionally, the beam can also create the same image in an instant. He would only need to move these electrons through a wire over radio waves.

The Phase-Out of Mechanical TVs

Electronic TVs turned out to be much better and convenient than mechanical TVs. It was an improved technology that used CRT technology. These televisions release beams of electrons from cathodes that hit the anodes on the TV screen at desired positions. This action creates images on the screen that were far better than mechanical televisions.

Electronic TVs started selling widely and slowly replaced mechanical televisions. By 1934, most mechanical TVs have already disappeared from the scene. And by 1939, all mechanical TV broadcasters in the USA replaced their systems with electronic broadcasting.

The number of TV broadcasters also started growing during this time. BY 1936, AT&T had laid down cable lines in New York and Philadelphia. CBS and BBC also started developing their TV content.

Many people contributed to the development of electronic TVs over the 1900s. It was an effort led by many agencies and individuals that finally resulted in another breakthrough.

C. The Coming of Color Televisions

Till now, the images on TVs were black and white. However, the idea of color televisions existed even before electronic TVs took off in sales. As early as 1904, a German inventor patented his concept of color TV. Vladimir Zworykin also conceptualized the same idea in 1925 but wasn't able to create a working piece.

John Logie Baird was able to achieve a color makeover for his mechanical TV in 1928. He used a special scanning disk that could generate red, blue, and green.

In 1940, Peter Goldmark invented a color TV that could transmit 343 lines of resolution. The early televisions, in comparison, could only support 18 - 20-lines of resolution. Goldmark worked with his team of CBS researchers based on the designs of Baird. However, this TV was still a mechanical one.

RCA was another competitor of CBS working on electronic color television. CBS got the edge when FCC adopted its mechanical TVs as the national standard of color television. But RCA continued its effort on creating a color TV that would be compatible with RCA customers across the country.

The efforts of RCA paid off, and FCC approved it as the standard in 1953. RCA TV sales grew exponentially, and color TVs started ranging on store shelves. By 1972, color televisions had replaced most black-and-white televisions in the USA. 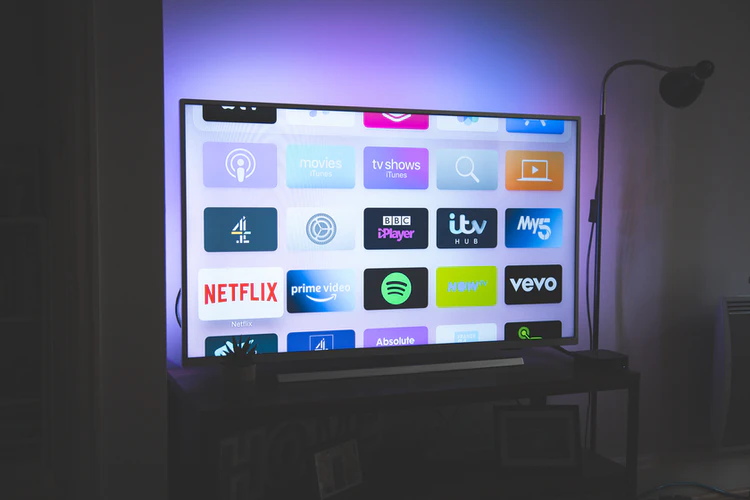 The idea of changing channels sitting on your couch came to inventors with the introduction of TVs. The name of Zenith holds a strong significance in TV remote development. Some manufacturers came out with basic mechanical remotes attached to the television. But they are far away from the wireless remotes we see today.

The first predecessor of today's TV remote was the Zenith Flashmatic, a wireless remote that came out in 1955. The remote used directional light with sensors on the TV to function. Starting with sound, the remotes used a variety of techniques for wireless communication. The manufacturers also experimented with getting past the limitations of mechanical remotes of the early days.

Till 1970, TV remotes had only a few buttons. That grew to include a range of functions and features in TV remotes during the 1990s, fuelled by the rise of cable TV.

D. The Increasing Popularity of Televisions

A number of events led to the growth of TV sales around the world. In the USA, mass production during the 1950s after WWII reduced the cost of TV sets. By 1960, over 60 million Americans had TVs in their homes.

The increase in TV sales also boosted the demand for TV content. Several providers started airing programs sponsored by brands. During the same time, people were experimenting with cable TV, and by 1962, America had around 800 cable systems.

In 1972, the Home Box Office (HBO) venture was launched. It was the first premium cable TV network that offered paid and on-demand content to US subscribers. HBO also used a satellite broadcasting system that gave it coverage across the whole nation.

The cable TV technology evolved significantly over time, and by 1990, operators were using optical fibers. Cable TV providers were able to create reliable, high-capacity networks that catered to the rising demands of content. MTV also hits the scene for the first time in 1980.

By 1993, 98% of Americans had at least one TV in their house. TV commercials also grew significantly, generating $750 million in revenues. 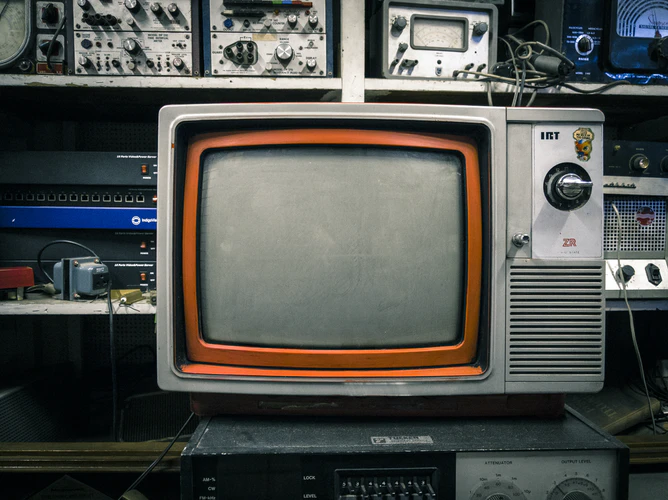 TV signals were mostly analog till now. However, the limitations of the analog signal were more than prominent. As a result, digital broadcasting started slowly growing popular. Digital television broadcasting can convert audio and video signals into binary codes for transmission. As a result, it produces far better picture quality and requires less frequency space.

The advantages of digital television led it to become the norm by 2009, as decided by the Advisory Committee on Advanced Television Services.

TVs had also started getting bigger and better. Scientists in Japan were experimenting with high-definition or HD TV at a time when the USA just switched to digital signals. In 1998, some HDTVs became available and cost anything from $5,000 to $10,000.

By 2005, flat-screen TVs were available in the market. We could also think of buying a 50-inches TV without spending our life savings.

The improvements in picture and broadcasting are still very much alive today. By 2010, 50% of Americans already owned an HDTV. Prices became much affordable, and technology also improved many times. Now, we have become bored with HDTV and are exploring options in 4K and 8K.

Cable TV has also taken a backseat, and streaming services are growing popular with every passing day. The TV industry is now controlled by big corporates that have eliminated the need for cable operators. We can now get content from across the world with just a touch of a button.

The evolution of TV is as interesting as it's exciting. The efforts of a few geniuses led to a full-fledged entertainment and communication system of the present age. We now can't think of spending life without a TV, which is an integral part of our modern existence. Do spare a thought on how TVs evolved over so many years next time you switch on your set. Share the interesting history of the TV with your friends and enjoy spreading knowledge.